It’s no secret that women face greater challenges when raising money. Pitchbook and All Raise reported that for-profit women founders received only 2.2% of the venture money invested in the U.S. in 2018. You’ll find gender incongruence like this in almost every industry, from paychecks, to career ladders, to boards. So you won’t be surprised to hear that gender disparities are also present in the philanthropic realm.

I wanted to unearth and debunk some of the underlying misconceptions that keep gender inequality the status quo. That’s why I interviewed powerhouse nonprofit funders Brittany Boettcher, Senior Program Manager at Skoll Foundation, Erin Baudo Felter, Executive Director of Okta for Good, Claire Chamberlain, Managing Director of Social Impact at BlackRock, Brigitte Hoyer Gosselink, Principal at Google.org, and Anne Wintroub, Director of Social Innovation at AT&T Inc. to hear what they had to say about women social entrepreneurs and funding. Never one to bury the lede, let me tell you – there are a lot of misconceptions out there.

Myth: Women are too risk-averse to successfully create groundbreaking organizations.

Shannon Farley: There are ever-present stereotypes of women founders that they tend to be measured in their revenue predictions and product roadmaps. This can lead some funders to believe that women lack the boldness required for success. When it comes to risk, do you see men taking more chances than women?

Anne Wintroub: No. Investors are too risk-averse. There is no shortage of women taking phenomenal risks and starting companies, but there is a shortage of investors getting behind them. Investors: look harder and invest earlier.

Brittany Boettcher: Not true. Gender stereotyping can be dangerous. Women are often seen as too risk-averse and perceived as good or caring managers, but not groundbreaking leaders. When in fact, there is very little difference in risk taking between genders. Unfortunately, society has placed the burden on lone female leaders to break this assumption rather than rethinking the structures and biases in place that reinforce this stereotype.

Brigitte Hoyer Gosselink: We have a lot of counterexamples to that. I’ve seen many women take on challenges that are incredibly complex and risky. Take Nithya Ramanathan from Nexleaf – who’s working on true systems-level change for vaccine delivery globally. It’s an extremely risky endeavor to try and take this scope of a problem on and build a technology that – to be successful – needs buy in from governments to move forward. Nithya is pushing against old, rusty gears that are hard to move. In the face of it, she has shown a level of dedication and creativity, and is trying to convince funders to be more risk tolerant. 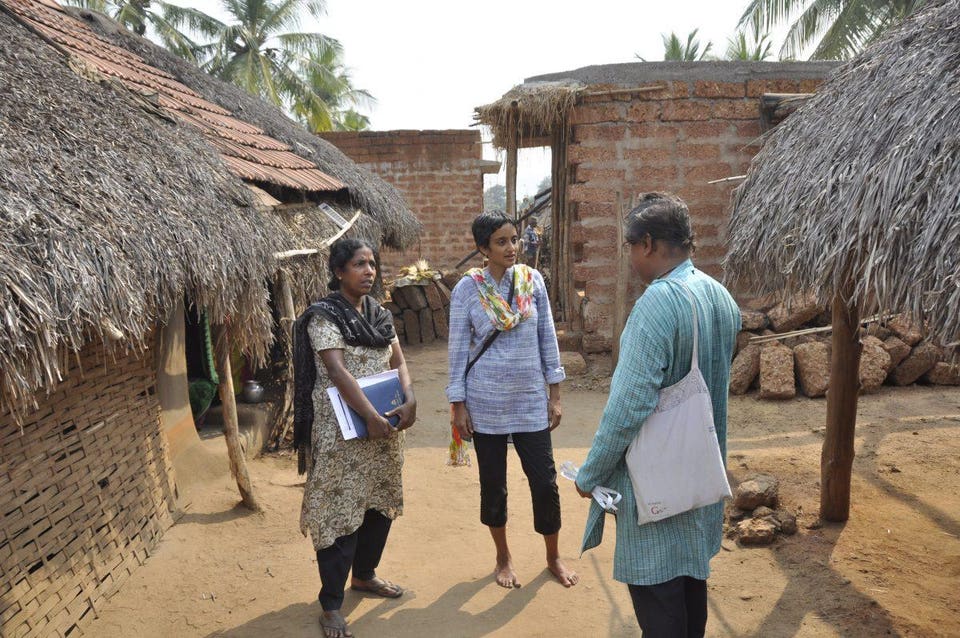 Farley: Classic tropes of entrepreneur charisma skew masculine. Confidence, determination, and boldness are not exclusively masculine traits, but the same characteristics that track as charisma for men leaders can be considered disagreeableness in women founders. From your experience, are men more charismatic founders than women?

Claire Chamberlain: That’s completely a myth. One example of breaking that stereotype is Mariana Costa, who Co-Founded Laboratoria, a tech nonprofit focused on teaching coding to low income women in central and south America. Mariana is incredibly charming, charismatic, and brings a high level of credibility when she talks about the operating model of what she’s built and what she’s working to achieve geographically. In fact, we are in our third year of funding her and are looking to do an additional grant with her to scale in Mexico.

Boettcher: What?! Not true! Anyone who thinks this has never spent time with a woman founder. But, what I think women understand, is that being a successful leader of social change requires more than just charisma. What becomes problematic, especially as women focus on scaling impact, is that men and women communicate vision in very different ways. In fact, due to embedded gender stereotypes women tend to base their vision more on facts to compensate for a perceived lack of competence as a leader. Let’s do away with charisma as a potential “criteria” and focus on track record to really understand which leaders are worthy of support.

Farley: One of Silicon Valley’s top VCs famously stated that successful founders of the ilk of Amazon and Google “all seem to be white, male nerds who’ve dropped out of Harvard or Stanford, and they absolutely have no social life.” Doerr elaborated, “That correlates more with any other success factor that I’ve seen in the world’s greatest entrepreneurs.” So, is it true that single, childless men are safer bets than women?

Wintroub: Totally false. Families are a huge asset. I find that women who are also parents have an ability to be extremely strategic with their time. Michelle Brown from Commonlit, for example, was meticulously organized before having a child, but when she became a parent, there was even greater diligence about how she was spending her time and how she was asking other people for their time.

Baudo Felter: This myth is ridiculous. What we’re really talking about here is a representation issue: there are not enough women investing in other women. If the investor community actively recruits, supports and retains more women, we’ll have more women investing in women, and this will become less of an issue. We don’t need to invest in more single, childless men — we need to fix representation at the investor level. Because if you’re a female investor who has raised both money and kids, you know that betting on another determined, powerful woman isn’t a risk. But if you’re an investor who’s only ever seen one thing at work and that’s your perspective, it’s unlikely that you’re going to invest outside of that. Not to mention, as a parent, your life is complicated, and you become much more able to separate signal from noise. That can be a huge asset in terms of being an entrepreneur – instilling confidence in others that you’ll do what you say you’re going to do.

Hoyer Gosselink: When supporting organizations, something we take into consideration is how the life experience of the founder factors into the mission of the organization, and how they’ll continue to show up for that mission, even when things get hard. Raising a family is rewarding and challenging, but people who are strongly rooted in the problem they’re addressing will stay focused on the critical reason that they started that organization.

One example that comes to mind is Jess Ladd, who works on an incredibly challenging topic [curbing sexual assault], and one that has gained more popular discussion since the time we supported her in 2012. Back then, people were scared to talk about sexual assault. It takes a lot to push forward an organization that is facing a ton of barriers, in addition to pushing forward the public discourse on a conversation. Jess’ deep commitment to this issue brought her even more resilience in the face of challenge.

Take it from top funders: these 3 myths about women and funding are sexism wrapped in misconception. Women entrepreneurs have proven time and time again to be relentless, risky, bold, charismatic, and committed. As the founder of the tech nonprofit Accelerator, Fast Forward, I witness day in and out that these perceptions of women founders are fallacies. Rather, the social sector is rife with powerful women building the groundbreaking technology our world so badly needs. Donors, funders, investors… are you listening?