HPE Accelerating Impact did it again. Scratch that: HPE Accelerating Impact did it even better this year, donating the most ever to tech nonprofits in the 2022 campaign. For the fourth year in a row, Fast Forward was thrilled to continue its partnership with Hewlett Packard Enterprise Foundation and infuse a record-breaking $1.4M of transformative capital into the tech for good sector.

Through this company-wide campaign, every HPE employee received a $25 donation credit from the HPE Foundation to give to one of thirty featured tech nonprofits. From the U.S., to Luxembourg, Peru and India, an unprecedented 52% of HPE’s workforce contributed to the 2022 campaign. That’s over – wait for it – 32,000 HPE employees from across the globe coming together to drive impact.

HPE Accelerating Impact gives each HPE employee the opportunity to support a cause that matters to them, while contributing to HPE’s mission of advancing the way the world lives and works through the power of technology. The organizations participating in the 2022 campaign are providing invaluable digital solutions to solve our world’s biggest problems. They range from inclusive distance learning tools, to affordable telehealth platforms, to legal support for refugees and asylum seekers, and much more. These services are in high demand. The HPE Foundation’s critical support will help tech nonprofits scale to serve more people in need.

“The contributions of HPE employees will impact millions of lives around the world. The Accelerating Impact campaign showcased the role technology plays in progressing society and protecting our planet. I’m excited for HPE to keep growing as a force for good.”

But it’s clear that all 30 tech nonprofits inspired the HPE team. The “give to all” option, which allowed employees to split their donation evenly across all of the participating organizations, was the second highest selected by HPE team members.

Since HPE Accelerating Impact wrapped, both the participating tech nonprofits and HPE employees have expressed how meaningful the campaign was. Lisa Wang, Founder of Almost Fun, shared: “Thank you HPE for your support of our mission to achieve math equity for all students! Your generous support allows us to partner with more schools and teachers through conferences and workshops, helping us reach our goal of supporting 4 million students by 2024.” 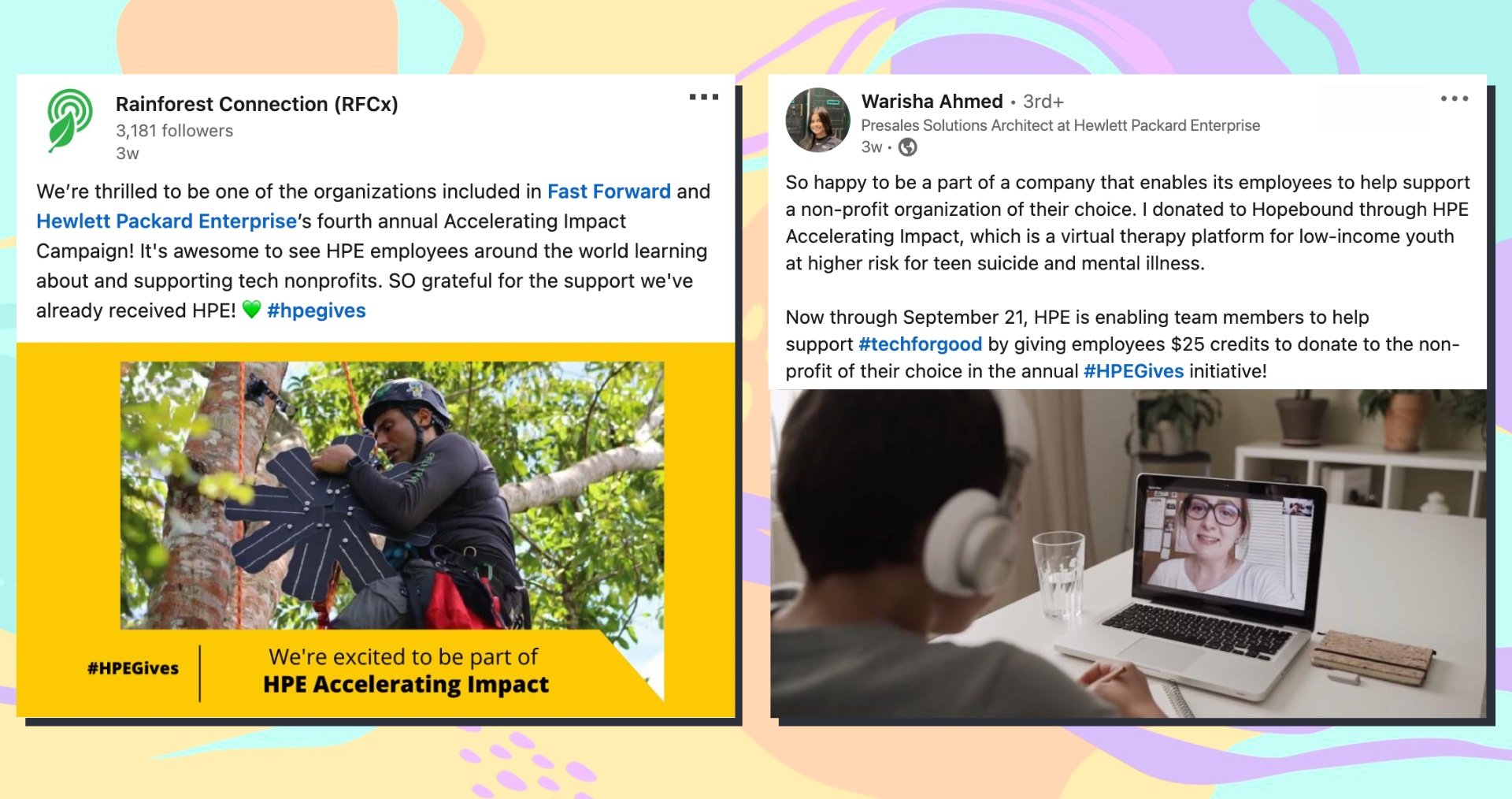 For all 30 tech nonprofits, the capital donated through HPE Accelerating Impact will launch them into the next stage of their development. It will seed new innovations and even greater impact.

“Four years in, HPE Accelerating Impact continues to delight and inspire. What a gift to have employees from all over the world lend their voice and attention to issues that impact us all. We are so grateful for HPE’s support of Fast Forward and the tech nonprofit community in what has become our most successful campaign yet.”

Across four years, HPE Accelerating Impact has mobilized $5M+ in critical funding to help tech nonprofits. The result is a positive impact on millions of people across the world. We are inspired by these organizations, and by the entire HPE team’s commitment to supercharging their work. We could not be more grateful to be in partnership with HPE and HPE Foundation to advance tech for good!